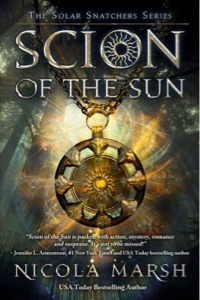 “Charmed and drawn in by Holly’s spunk and snark, Scion of the Sun will leave you spinning and falling for Joss right along with Holly. Marsh’s unique story is packed with action, mystery, romance and suspense. This is not to be missed!” – Jennifer L. Armentrout, USA TODAY Bestselling Author 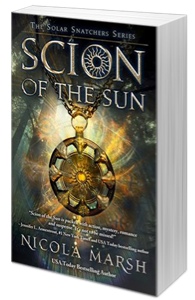 When she least expects it, sixteen-year old Holly Burton’s unremarkable life is shaken to the core. A vision of the mother Holly never knew leaves her questioning everything she believes.
Eager for answers, Holly enrolls at a boarding school for highly gifted students in Wolfebane, New Hampshire. But things will get worse before they get better, as Holly accidentally transports to a parallel existence where she's confronted by a dark and ancient evil.
With the help of Joss, a sexy alpha warrior sworn to protect her, and her new BFF, the equally swoon-worthy Quinn, Holly faces her fears and an unlikely adversary in a showdown that is worse than anything she could’ve possibly imagined …
Goodreads | Amazon | Barnes & Noble | Kobo | iTunes 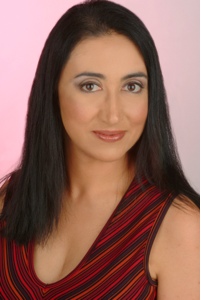 USA TODAY bestselling author Nicola Marsh writes flirty fiction with flair for adults and riveting, spooky stories for teens.
She has published 43 contemporary romances with Harlequin, Entangled Publishing and indie, and sold over 5 million copies worldwide. Her first mainstream romance BUSTED IN BOLLYWOOD was nominated for Romantic Book of the Year 2012. Her first indie romance, CRAZY LOVE, was a 2012 ARRA finalist.

Her debut young adult novel, a supernatural thriller BANISH, released with Harlequin Teen August 2013, and her YA urban fantasy series kicks off with SCION OF THE SUN, November 2013, with Month9Books.

A physiotherapist for thirteen years, she now adores writing full time, raising her two little heroes, sharing fine food with family and friends, and her favorite, curling up with a good book!
Website | Facebook | Twitter

Spotlight by Nicola Marsh:
My imagination takes me to some wild places, so when Holly in SCION OF THE SUN discovered she can teleport with the aid of the sun, it didn’t surprise me.
I’ve often wished I could teleport out of a situation! Or maybe into one…
Considering my busy writing schedule and manic life, I would teleport to a cozy day spa packed with soft sofas to snuggle into it, copious chocolate on hand, cabana boys to serve me and a library packed with fabulous books!
Maybe books are my teleportation device. I know whenever I open the pages of a fabulous book I’ll be transported to another world. The perfect escapism.Without the motion sickness teleportation would surely give me!
So if you could teleport anywhere in the world, where would it be? And why?
I’ll start.
Hawaii. Because I love the island atmosphere.
And they film Hawaii 5-0 there.
So I might get to hang out with my fave celebrity crush, Alex O’Loughlin.
A girl can dream, right?
Click here for reviews, interviews, and guest posts from other awesome blogs on the Scion of the Sun tour!