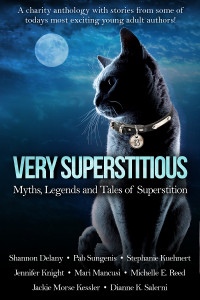 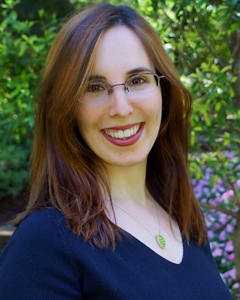 Jackie Morse Kessler grew up in Brooklyn, NY, with a cranky cat and overflowing shelves filled with dolls and books. Now she’s in Upstate NY with another cranky cat, a loving husband, two sons, and overflowing shelves filled with dragons and books (except when her sons steal her dragons). She has a bachelor’s degree in English and American Literature, and yet she’s never read any Jane Austen (with or without zombies). She also has a master’s degree in media ecology. (The living study of technology and culture. Which is cool, but she still can’t figure out how to useTweetdeck.)

Jackie spends a lot of time writing, reading, and getting distracted by bright and shiny new ideas. (She just came up with a new idea right now.) She has a weakness for chocolate and a tendency to let her cat take over her office chair.
Website | Twitter | Facebook | Goodreads

Cover Reveal of 'To Bear an Iron Key': 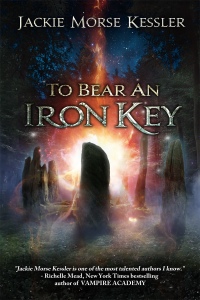 Synopsis:
Trapped by her grandmother's curse and her mother's love, Bromwyn is
doomed to marry Brend, Old Nick Ironside’s apprentice blacksmith, upon her
seventeenth birthday. Bromwyn thinks that boredom and a loveless
marriage are the worst that awaits her until her best friend Rusty, the baker's
son and an aspiring thief, steals from the wrong person and becomes the
guardian of the World Door on Midsummer's night. Now Rusty and Bromwyn
must match wits the fairies, especially their murderous royal couple. At
stake are Bromwyn's magic, Rusty's life, and ultimately the safety of their
world.

Blurb:
"Bromwyn turned to face the burning fields. Reaching deep inside of herself, she closed her eyes and touched the core of her power, the place where her magic lived, where it connected her to all of Nature. She held onto that magic, let it fill her almost to the bursting point, and then she cast it out onto the fields. It blanketed the rows of spelt, and she felt as it rode the wind—Air—and then touched the grain—Earth—and then sizzled around the fire."
Back-Cover Copy:

Five years ago, the young witch Bromwyn refused a gift from the powerful fairy king. Tonight, on Midsummer, that decision comes back to haunt her. When her best friend Rusty picks the wrong pocket, he and Bromwyn are all that stand between their village and the rampaging fairies who have pushed through the World Door. If they cannot outwit the fairy king and queen before the World Door closes at sunrise, the friends will lose everything -- their village, Bromwyn's magic, and Rusty's life.

You’re home alone, there’s a fire!  Top 3 things you’d grab and save from the fire?
JMK: Assuming that my cat is fine...my laptop and my engagement ring. (I know, that’s two. I can’t count. Also, ever since I had to pitch 1,000 comic books after a flood a few years ago, I’ve gotten better about letting things go.)
Top 3 Favorite authors (dead or alive) and why?
JMK: Neil Gaiman – Ever since I read The Sandman comic book series, I’ve been enamoured with his storytelling. He’s my single biggest inspiration for being a writer. Jim Butcher – Harry Dresden is my hero, and I have the button to prove it! A.S. King– Her books are personal and powerful, funny and tragic, and quietly extraordinary; they should be required reading.
Top 3 Favorite snacks while writing and why?
JMK: Chocolate, chocolate, and chocolate. Because: chocolate!!!
Top 3 Favorite books that inspired you to write and why?
JMK: The Hobbit and Lord of the Rings (yeah, four books sneakily lumped together as one!) – These books originally sparked my love of fantasy and the hero’s journey. DragonlanceChronicles trilogy – Heroes and warriors, wizards and kendor, elves and dwarves, and oh yes: dragons! Dragonlance Legends trilogy – Raistlin!!!! (Give me the darkling wizard over the heroic warrior any day!)
Top 3 favorite songs to listen to while writing and why?
JMK: This is different for every book I’m writing. I didn’t have much of a playlist for TO BEAR AN IRON KEY, but an old friend once told me that Bromwyn’s theme song should be “Jig of Life” from Kate Bush’s Hounds of Love.
Top 3 favorite techniques to overcome writers block and why?
JMK: Ugh, writer’s block! Hate it. For me, it usually means that I’ve taken the story down the wrong path. So first, reread. Second, see where my internal editor pipes up and says“THERE, TRY SOMETHING ELSE.” Third, try something else. (And for the love of chocolate, do a “Save As.”)
Top 3 musicians/bands/groups and why?
JMK: Currently? Nirvana, and if you read my Riders series, you know why; Green Day circa American Idiot and 21st Century Breakdown, because I adore the Broadway show American Idiot; and Pink, who totally and completely rocks out loud. (Also: older Linkin Park and Breaking Benjamin)
Top 3 favorite movies of all time and why?
JMK: Say Anything, because it’s insanely romantic; Heathers, because it’s insanely dark; and The Breakfast Club, because it just hits it on the head in so many ways.
Top 3 favorite actors/actresses and why?
JMK: Matt Damon, because he’s my boy; David Tennant, because the Tenth Doctor is my Doctor; and Zachary Quinto, who **killed** it as Spock (and the first two seasons of Heroes).

Click here to visit more stops on the 'Very Superstitious' Blog Tour, including guest posts by the writers, reviews, and interviews.
Posted by Unknown at 4:00 AM