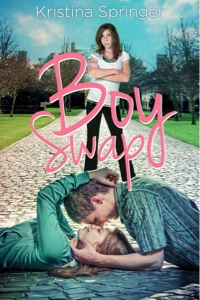 Research shows that seven out of ten girl fights are over a guy. The Boy Swap Club fixes all that. In an effort to spread around male cuteness and minimize fights and backstabbing, they just share boyfriends. And Brooke Thomas, consummate band member, has been asked to join the super secret club because the president of the club has the hots for her guy.

Brooke doesn’t want to share her boyfriend. I mean, who does? But how can she say no? She, a second chair flutist in the school band, finds herself sitting between the Varsity Cheerleader Captain and the Homecoming Queen at the first meeting. Her friends will never believe this in a million years. Too bad she can’t tell them. But she knows. This one event can change her entire life. What if she becomes actual friends with one of these girls? It might be worth sharing her boyfriend.


Author Bio:
Kristina Springer is the best-selling author of THE ESPRESSOLOGIST, MY FAKE BOYFRIEND IS BETTER THAN YOURS, JUST YOUR AVERAGE PRINCESS, THE PAPARAZZI PROJECT and BOY SWAP. She has a Masters in Writing from DePaul University and she resides in a suburb of Chicago with her husband and children. Read more about her at http://www.kristinaspringer.com.
Facebook | Twitter

Excerpt:
I stand before Amanda’s desk and she raises one eyebrow at me. I yank my scarf out of my purse and wave it in the air, like a white surrender flag. Amanda shakes her head and smirks. “Sit.”
I grab a nearby chair and sit down next to her. “Hi, Amanda.”
She flashes a glance at me.
“I’m in— ”
“I know who you are,” she cuts me off. “You don’t have to announce it.”
“Oh. Well, do you want to sketch me first or shall I sketch you?”
“You can sketch me first,” she says. I open up my sketchpad and pull a pencil from my purse. I study Amanda’s face for a moment to see what I can find out about her. She’s pretty expressionless right now and her blue-gray eyes are staring back at me unblinking. She has long, straight, honey-blond hair carefully tucked behind her ears and her skin is absolutely perfect, which is completely unfair. She’s like an after picture for Proactiv. I start drawing her eyes first.
“So,” I say, trying to think of some way to break the ice between us, “how long have you and Cassie been friends?”
“Long time. Since grade school,” she says.
Kinda like Delaney and me. Except they stayed friends and Delaney acts like she barely recollects me.
“She seems nice,” I say, working on Amanda’s right pupil.
“Uh huh.”
Hmm, Amanda isn’t so talkative.
“She likes my boyfriend huh?” I venture.
Amanda chuckles a little in response.
“How long have you been in B—”
“Shh,” she interrupts sternly, then looks around to see if anyone overheard.
“What?” I blink hard, taken aback a bit.
“Listen,” she says, leaning in, “we don’t talk about it. It just is.”
“That’s just it. I don’t get how it works. Are we going to have more meetings or something?”
“Oh my God!” Amanda draws out her words, clearly irritated. “Did you not just hear me tell you not to talk about it?”
“But—”
“No! I’m going to go work with Tony. See you later.” She scoops up her things and walks away from me and toward the school’s quarterback.
I’m trying hard not to cry. Amanda was way harsh. And now I don’t have a partner to sketch. Which means I’ll probably have to work with Mr. O’Dell again and I hate working with Mr. O’Dell. I already have an abstract watercolor and a clay bust of him at home.