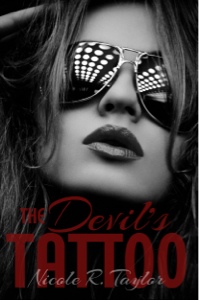 
Zoe Granger picked up her first guitar the day her heart was smashed into a billion pieces. It was a way to keep her mind off her inevitable downward spiral, but music soon became her escape. She's been burned too many times to tell and is just happy to coast through life, never putting herself out there. That's until her best friend Dee suggests they start a band and suddenly she finds herself not just a part of it, but fronting the whole outfit.

They call themselves The Devil's Tattoo and when they release their debut EP, it rockets to the top of the charts and it's like an overnight fairytale. Contracts, photo shoots, royalties and interviews are heaped onto the shy Zoe and it's like she's finally found her place. Then comes the phone call that changes everything. They've been asked to co-headline a tour with one of the hottest bands of the moment, The Stabs and Zoe will never be the same again.

Will Strickland is one fourth of the hottest indie rock band to ever grace the airwaves. He's the bass player in The Stabs, hot as hell and could have his pick of any girl that flings herself at him. But he's only got eyes for Zoe and she has no idea why he'd bother. She's got one hell of a trust issue and an attitude to boot and Will seems to be the one who wants to tame her, but is he game enough?

The Devil's Tattoo and The Stabs go on the road and it's either going to be a highway to hell or a stairway to heaven. Only time will tell who will come out on top and Zoe's determined to do it without getting her heart broken… again.

Click here to view the book trailer for The Devil's Tattoo. 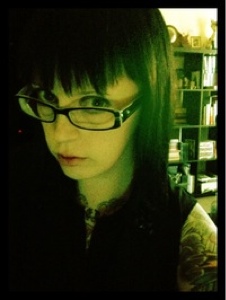 Nicole R. Taylor is an Australian born paranormal, fantasy and contemporary fiction author. She is a graduate of the University of Ballarat Professional Writing and Editing programme and is a former music memorabilia sales person and grocery merchandiser.
She currently lives in Ballarat, Victoria, Australia with a two year old rescue cat named, Burger. She enjoys reading, writing (of course!), traveling and a little too much chocolate. One day she hopes to sky dive, but has to work up the courage first.

The first in her new paranormal fantasy series, The Witch Hunter Saga is available in e-edition and print from March 20th 2013.

My Review:
I received an advanced reading copy of The Devil's Tattoo in exchange for an honest review.
I absolutely LOVED this book! I was initially excited to read it before I ever even read the synopsis because the cover is so pretty (silly, I know) and it did not disappoint. I know that rock star romances are not so uncommon in the book world, but somehow I have yet to read one until now. I really enjoyed the fantastical aspect it added to the story. The characters and emotions were very real, but they were set in such a fantasy (although not impossible fantasy like paranormal stories) world. It was an interesting contrast and fun to read about a world that's fantastic, but possible.
The story starts out from Zoe's point of view. Zoe is a guitar player with a shaky romantic past and a shy, somewhat closed off disposition. She and her best friend Dee (who is a guy) start a band called The Devil's Tattoo with a couple of other guys and they become successful very quickly. They are soon invited to go on a big time tour with the huge indie rock band, The Stabs. Will is the bass player of The Stabs. He's ridiculously good-looking, talented, and totally enamored with Zoe. They go on tour together and their romance grows. Zoe is terrified of being hurt again, but Will is determined to win her over.
First off I want to say that I really enjoyed both Zoe and Will (the story is told from both of their points of view). Their love story is sweet, sometimes awkward, REALLY hot (sexy time scenes aplenty), but most importantly it's realistic and true to life. I don't always love shy characters because they tend to get on my nerves and I find myself wanting to shake them and yell at them. This was not the case with this book. Both Zoe and Will are somewhat shy characters, but they managed to also be endearing. Their mutual shyness led to some hilariously awkward dialogue. Taylor managed to make their shyness and awkwardness an asset to both the characters and the story.
Secondly I need to talk about how much I loved the friendship between Zoe and Dee. Their friendship is hilarious and fun, but also genuine and touching. I always tended to be friends with guys when I was younger and growing up (not sure why exactly, I love girlfriends too) and it is refreshing to read a story with a strong male-female friendship. I always felt kind of like a weirdo having mostly guy friends when most movies and books show girlfriends as the norm. I appreciate a story with a friendship that I can relate to. Not to mention Dee is simply a great, well-developed character with whom Zoe has awesome chemistry.
The Devil's Tattoo is incredibly well written. The story is well paced and flows beautifully. I think the big standout in the writing, though, is the dialogue. I found it to be genuine, witty, and touching. Taylor definitely has a gift for words.
This book really just had it all for me. The characters are wonderful and I found myself rooting for them from the very beginning. The story itself is fun, romantic, and steamy all at the same time. I loved all of the music references and getting a glimpse into this crazy world I've never really experienced before. The writing and pacing are perfect. This book book sucked me in and kept me wrapped up in its world. I cannot wait to read more by Nicole R. Taylor. I really hope she writes more stories in the world of The Devil's Tattoo. I'd definitely love to see more of some of the other characters and what comes next for them. 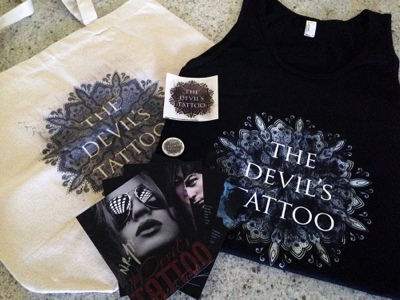