Review of Lauren Myracle's 'The Infinite Moment of Us' 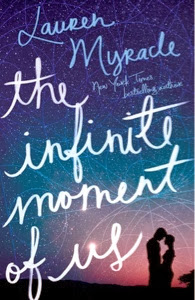 Synopsis:
For as long as she can remember, Wren Gray’s goal has been to please her parents. But as high school graduation nears, so does an uncomfortable realization: Pleasing her parents once overlapped with pleasing herself, but now... not so much. Wren needs to honor her own desires, but how can she if she doesn’t even know what they are?

Charlie Parker, on the other hand, is painfully aware of his heart’s desire. A gentle boy with a troubled past, Charlie has loved Wren since the day he first saw her. But a girl like Wren would never fall for a guy like Charlie—at least not the sort of guy Charlie believes himself to be.


And yet certain things are written in the stars. And in the summer after high school, Wren and Charlie’s souls will collide. But souls are complicated, as are the bodies that house them...


Sexy, romantic, and oh-so-true to life, this is an unforgettable look at first love from one of young adult fiction’s greatest writers.

So to be blunt about it, this book was pretty lame and left me wanting so much more. I was really excited too because of how pretty the cover is (silly, I know). It was an ok love story, but the author tried so hard to make it more deep than it actually was. It came across as forced and a little phony.

It's a love story between Wren and Charlie. Wren is a goodie goodie who has never had a boyfriend. Charlie is a foster kid with a sad past and desperate to find someone to love that won't hurt him. They sort of know each other from school, but not very well. Through a few chance happenings they become close and Wren realizes Charlie has had a crush on her for a long time. They end up dating, but Wren is supposed to leave the country soon to do volunteer work and Charlie is supposed to start college soon. They have to both figure out just how important their relationship is.

First off I want to say that I really couldn't stand Wren. She's obnoxious, lacks common sense, and does the dumbest things throughout the book. It reached a point where I just stopped caring about her at all, and it's quite difficult to like a book when you don't give a crap about the main character. Charlie was sweet and very nice, but also very stupid and naive. He wasn't nearly as bad as Wren, but he wasn't that great either.

The story itself was slow moving and nearly non-existent. The characters fell in love and had some arbitrary problems that were in no way interesting. It was almost like the author thought: well, it doesn't really matter that very little actually happens in the book as long as I put in some generic, deep sounding thoughts for each of the characters. It might have even worked if the deep thoughts hadn't been so damned shallow.

It seems to me Lauren Myracle is trying to be the next John Green (who can pull off a fairly simple plot with deep meaning and hilarious dialogue), but it just isn't happening. The book was fairly well written, but the story and characters sucked, it took forever for me to get through, and the morals and ideas were obvious regurgitated crap. Yeah, we get that we are greater than the sum of our parts. That's not a new concept and you don't have to keep saying it over and over again in different words!

Wow, that was kind of harsh, but seriously, this book has few redeeming qualities, and I'm irritated that I wasted my time on it. Don't let the cover fool you, skip this one!!