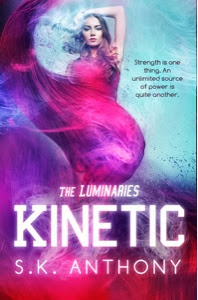 Synopsis:
Being strong is one thing. Being an unlimited source of power is quite another.

Genetically altered by the Organization, Annie Fox takes down criminals CIA-style with her luminary strength. With nothing to mend but her broken heart, she is relentlessly pursued by her boss Derek Lake. Just when Annie is about to give him a chance, her ex-husband unexpectedly comes out of hiding.

A wanted man, Nick Logan is a cold-hearted murderer who is considered enemy number one, and orders are clear: kill on contact. He is more powerful than ever and threatens the lives of those she holds most dear. His plan? Get his hands on Annie and use her Kinetic energy to destroy them all. When Annie finds herself with an opportunity to end him, she pauses, horrified by the scars covering the face she once loved. A split second that will cost her everything…
Click here to view on Goodreads. 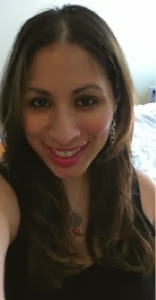 S. K. Anthony is a writer, a reader and a make-stuff-up-er who lives in New York with her husband and toddler twins. She is a wine connoisseur, which just really means she knows she loves it, and a caffeine addict. When she isn’t busy with her family she finds herself being transported into the world of imagination. Well, either that or running away from spiders…she is convinced they are out to get her!

I stooped down and back-elbowed him across his jaw. His head fell sideways, but not for long, he turned to watch me but said nothing. I got up and slammed a good kick to his side. He winced but remained silent.
“What are you up to?” I demanded.
“Killing.”
“Why?”
He smiled. “It’s fun.”
“I’m about to call Derek, but I’d like to know what you’re after first.”
“Let me go,” he said.
“Oh… you’re hilarious.”
“You’ll regret keeping me here, Annie. I can’t afford to be captured right now.”
“Oh, RIGHT, what was I thinking? I should have called ahead to schedule an appointment for your capture. I just didn’t have your number!” I watched him in disbelief.
“I don’t have email or Twitter either. You know why?” His lip twitched. “I can’t have followers.”
I heard a chuckle from behind.
“Really, Beth? You’re going to encourage him?”
“What? No, it was just… I thought it was… funny,” she finished saying in a low voice.
I turned back to Nick and was about to grab his neck when I realized being that close to him would not be a good idea. If I allowed myself to get that close to him, he could hypnotize me to let him go, so instead, I kicked him.
“Now you’re just doing this for spite,” he said.
“Yes.” I kicked him again. “You started it at Worldsafe.”
“What are you, ten? I pinch you, you pinch me? Actually, I wouldn’t mind pinching you…” I was about to slam him again. “No, stop. Stop! Your kicks are more painful than mine. Stop it.”
“Any more requests? It seems you think you’re in charge here,” I said.
“Just, wait, all right? Don’t call Derek. Don’t let anyone know I’m here,” Nick begged.
“Scared?” I smirked.
Giveaways: