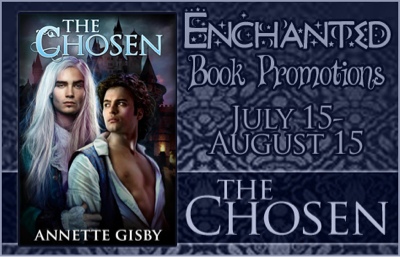 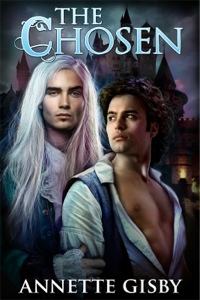 Title: The Chosen
Author: Annette Gisby
Genre: M/M fantasy romance
Synopsis:
The neighbouring kingdoms of Oscia andArcathia have been at a tentative peace for three years after centuries of warfare. Prince Severin of Arcathia has been brought up to put duty before all else and as the only son of the King and Queen, it is his duty to marry and produce an heir. His parents want him to marry an Oscianprincess to cement that tentative peace. Unfortunately Severin isn't interested in princesses. Now, if he had his pick of princes that would be another matter.
Havyn has been a slave all his life. When his aptitude for wizardry is discovered, he finds himself purchased and freed by Prince Severin and apprenticed to the royal wizard, Ildar. His duty is to stay chaste to keep his powers strong, but his feelings for Severin sorely test his resolve.
With kingdoms at war, the throne hanging in the balance, magic in the air, and outside forces trying to keep them apart, can the two men find happiness together, or is duty more important than love? 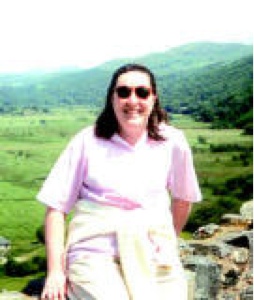 Annette Gisby grew up in a small town in Northern Ireland, moving to London when she was seventeen. Being a very small town there were no bookshops and a small library. When she'd devoured every book she could get her hands on in the library, she started writing her own stories so she would always have something to read later.
When not writing she enjoys reading, cinema, theatre, walks along deserted beaches or wandering around ruined castles (great places for inspiration!) New Zealand is her favourite place and she hopes to travel back there one day. She's a fan of Japanese Manga and Anime and one day hopes to learn Japanese.
She currently lives in Hampshire with her husband, a collection of porcelain dolls and stuffed penguins and enough books to fill a small library. It's diminishing gradually since the discovery of ebooks but still has a long way to go.
Author Links:
http://www.annettegisby.n3.net

http://glbt.theromancereviews.com/mypageprofile.php?location=annettegisby
Purchase: Amazon  Amazon UK  All Romance eBooks  Smashwords
Review:
I really enjoyed this book! I was very excited about this book going into it and it didn't disappoint. It was unique and intriguing and I wasn't able to stop reading until I finished the whole book in one sitting. The story was very imaginative and gripping. I loved all of the characters and Annette Gisby definitely has a way with words. My only complaint is that it wasn't longer! I could have kept reading on for twice as many pages.
This book tells the stories of Severin and Havyn. Severin is a prince who needs to marry a princess from the neighboring kingdom of Oscia in order to keep the peace between their two lands. Unfortunately for him he isn't attracted to women. He struggles with appeasing his family and choosing with his heart. Havyn has been a slave his whole life, but is discovered to have magical abilities. Severin pays to free Havyn so that he can apprentice as a wizard. One of the rules of being an apprentice in wizardry is to refrain from sex and love. Naturally Havyn and Severin fall in love. Both of them have to struggle to figure out which is more important: duty or love? I won't giveaway the ending, but I will say the ending is perfect.
The characters in this book were all beautifully written. I loved them all, even the characters that have flaws. Ildar was one character I found myself really enjoying. Ildar is the wizard that Havyn apprentices under. He's very uptight and strict, but also loveable. I have to say my favorite character though was Severin. He is brave and heroic, and almost impossible to dislike.
I cannot stress how much I enjoyed this book. It is a must-read. It is on the shorter side, like I said, but it is well worth reading. The story doesn't feel forced or rushed like in other shorter novels. The writing in this novel is well structured and organized, and very beautifully written. This is the first novel I've read with a gay love story as the focus of the book. I absolutely loved it. Gisby did a really great job with the story and the main relationship. It felt realistic and true to me. And it really was a touching love story.
If you're looking for a quick, action-packed read with loveable characters; this book is most definitely for you.